Category: The True Story of Dad 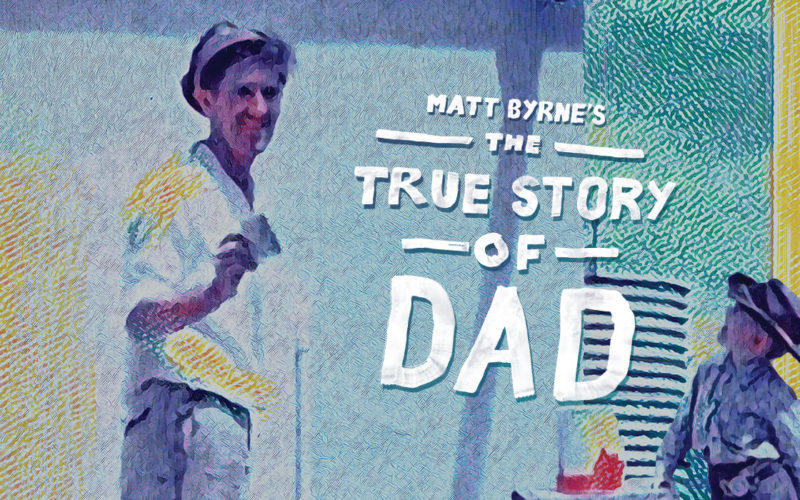 Matt Byrne’s tells the True Story of Dad in Norwood

Matt Byrne has a story to tell about his father for the 2020 Adelaide Fringe – and it’s all true!

The True Story of Dad will be in a new Fringe home for MBM in the Don Pyatt Hall next to the Norwood Town Hall, from February 18 to March 13 at 11 a.m.

Theatre identity Byrne’s father passed away at 98 during the 2019 Fringe after a long and happy life and this is Matt’s hilarious and touching tribute to him.

“Kevin John Byrne was a house painter, a soldier, a Catholic, a truck driver, a joker, a Father of Five and a diehard Port supporter,” Byrne said.

“He played the guitar, loved his wife Gwen and his five children, cherished his fruit trees and hated possums.

“Dad could tell a joke, sing a song, make us laugh and when he sadly left us at 98 I realised it was time to tell his story.”

“The Cowboy” as Dad was known by his family, was raised at Sutherlands in SA’s dusty Mid-North by his dear mother Bridget.

“Dad was one of six children, left fatherless by typhoid when he was only seven,” he said.

“Dad loved the radio where he first heard and imitated Aussie legends like Roy Rene. He played cricket and couldn’t bear to watch fruit fall off a tree as they had so little.

“Dad was a gentle man whose greatest achievement was his family. He was so happy the day we all had a house of our own.

“He had a lifelong battle with opposition footy supporters … and possums, and the stories are many and hilarious.”

Writer/director Matt Byrne said The True Story of Dad would be a perfect fit for the new MBM Fringe venue, The Don Pyatt Hall.

“And it is an ideal show for the Boomer generation and more mature Fringegoers but anyone who loves a great yarn will enjoy it,” he said.

“We’re doing the show at 11 a.m. which allows the audience to beat the summer heat and have a lovely morning out with tea, coffee and biccies!

“You’ll meet some of the characters of Dad’s life and they are plentiful and colorful. Dad was an original and this is his story.”

“I’ve had great success with one-man shows like Over The Hill about Benny Hill and Caddyshack and Other Dangerfields about Rodney Dangerfield at Maxim’s Wine Bar,” he said.

“But the Don Pyatt Hall is even more accessible and is at ground level, right next to the Norwood Concert Hall. You enter off George Street and the seating is excellent.”

“The Fringe wouldn’t be complete without an MBM comedy at Norwood, written and produced by local theatre identity Matt Byrne!” – Adelaide Theatre Guide.